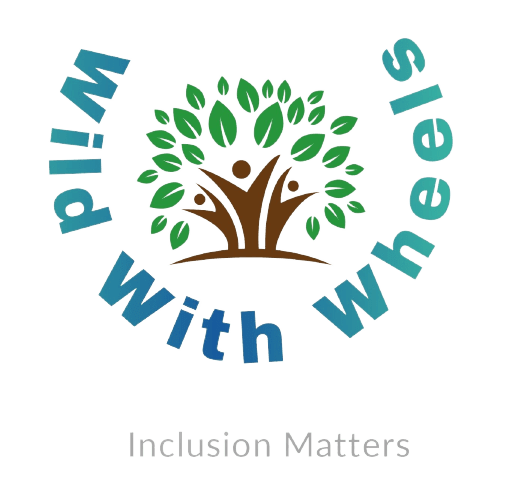 Just before Halloween, our local community garden held a Samhain gathering. So I rode my TGA Supersport up to the Locavore Community Garden. They have invested in an accessible path as well as one wheelchair accessible raised bed and the most recent addition is a wheelchair accessble compost toilet made by local eco builders Cosmic Constructions.

The morning had inclement weather which delayed the start. We arrived and the gardeners had kindly opened up the side access so I could avoid the steps. There was a fire already alight for roasting marshmallows. Some participants were already carving spoons under the guidance of an expert wood carver. The children joined in with autumn craft activites and a table was laid out for pumpkin carving.


We were offered some tasty vegetable and chickpea stew with some of our local bakers sourdough bread, along with some hot mulled apple juice. It was delicious and warming.

Without announcement, the atmosphere suddenly was filled with the beautiful sound of Nordic Singing, which was mesmirising and brought an audience to listen to this captivating voice. We were then drawn to the sound of the drum as we were naturally led to a clearing in the Garden, and I journeyed along a trodden path to find a spot to watch the Outdoor Puppetry.

We watched a display of a creature emerging from the landscape, with the sound of the drum and whistling of wind in the trees. Then the drummer spoke a poem about not listening to words but hearing the voice of nature. It was very moving and brought a poignant connection to the natural world whilst celebrating the ancient Celtic festival of Samhain.

My Supersport basket was also large enough to carry my sons carved pumpkin home – along with other craft items that my neighbours had made too.

On Halloween, I prepared the Supersport for our annual tradition of joining the Trick or Treaters around the neighbourhood. Halloween decorations adorned the scooter along with LED lights and the main front and rear lights. It was so well lit up, But was too windy to wear my witches hat as it kept blowing away, so I settled for a witches nose and warm hat instead.


It was great to be able to take my son around the local streets with neighbours, and with the generosity of the local community, my son returned home with a full basket of treats. There were some tremendous displays and some artistic pumpkin carvings along the route. It was refreshing to be able to join in this experience, especially since the previous years Trick or Treat was cancelled due to the pandemic restrictions.

Wild with Wheels are looking at expanding our capacity to reach further afield in the Kent area, so we shall be forming a Community Association, to include our participants, followers and supporters.

So we are reaching out to you, to initially form a comm…

Continue reading
Time to Talk wellbeing walk along the seafront

Wellbeing Walk Leader Michael from @walks.words.wellbeing shares his summary of todays session at Lower Leas Coastal Park and this time was spent down on the coastal path overlooking the Channel.

"Combining Time to Talk Day and Optimist Day, this was an…


Cambers, inclines and slopes, oh my!

The day I discovered how accessibility-challenged the Trail could be…

The RSPB's Big Garden Birdwatch was coming up the weekend after our fortnightly visit to Fort Burgoyne. So a morning of light drizzle didn't dampen our spirits as we got ready to help our feathered friends.


We welcomed new families to our group, and …

If you can't find the information you are looking for then please get in touch and we will respond as soon as we can.

Feel free to contact us with any questions you may have.


Disclaimer: All information on this site is given with your comfort and wellbeing in mind and no liability is accepted in respect of any damage, loss or injury which might result from acting on it.